You don’t have to be an expert on Hispanic cultures to achieve cultural relevancy in your Spanish content (that’s what we’re here for!). But it is a step in the right direction to always be open to learning about the culture that’s so intimately intertwined with the Spanish language.

In spirit of the holidays, what’s more relevant than insight into Hispanic holiday customs? We’ve already done a post on Top Hispanic Holiday Traditions, but did you know that the poinsettia flower – a symbol so commonly seen during the U.S. holiday season – is actually Mexican in origin?

Unlike most Americans, the majority of Latinos celebrate Christmas on December 24. Nochebuena , or Christmas Eve, is often the biggest feast of the Christmas season. And guess what flower is referred to as the “Flower of Christmas Eve?” That’s right: The poinsettia.

Here is some interesting history and fun facts about poinsettias and the Hispanic culture:

But I thought poinsettias were an American holiday symbol?

How did poinsettias become associated with Christmas and the holiday season? 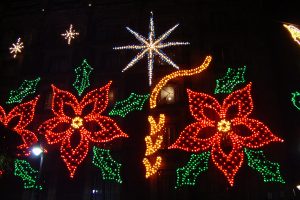 The main square in Mexico City, “El Zocalo,” is decorated with thousands and thousands of lights. Poinsettias are widely featured in this amazing display!

As you can see, from the different versions of Spanish words, to the different meanings and references per Latin American country, accurately establishing cultural relevance in Spanish content can be a little complex. For instance, the meaning of Noche Buena in Mexican culture is typically used to wish someone a good night, whereas Nochebuena is used to refer to Christmas Eve. Examples like these make it easy to see why running something through Google Translate simply isn’t the best idea, and could easily lead to incorrect or even offensive results.

It’s history like the story of the poinsettia and its cultural relevance to the Hispanic population that makes hiring a translator such a crucial element of your business plan or growth strategy. This holiday, give your business a gift of capturing the attention of a new, Spanish-speaking audience: Fill out the form below to contact English to Spanish Raleigh for your translation needs, today!

Business Translation from English to Spanish: The value of translating business documents
Getting Healthcare & Health Insurance Materials Translated into Spanish