It’s often said that English is a difficult language to learn. Not only does English feature over 200 ways to spell just 44 sounds, it contains seemingly endless irregularities in spelling, pronunciation, and grammar. Combined with the subtleties of context, sentence patterns, word choice, and colloquialisms, it can be an intimidating language for many non-native speakers in Raleigh and beyond. Likewise, these issues make ostensibly straightforward translation anything but.

Originally launched in 2006, Google Translate offers free, instant translations in and out of over 70 languages, including Spanish. More recently, an audio feature was added, allowing the tool to translate spoken or recorded content. While this might seem like an easy way to close the language gap, it does little to bridge the cultural one. Artificial intelligence is evolving tremendously, but in the area of language translation, there’s still no substitute for the human element.

To highlight some of the pros and cons of Google Translate, the technology was put to the test against top human translators in an English to Spanish face-off. This infographic shows the detailed results, but there are three main takeaways: 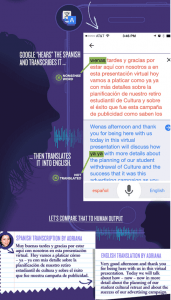 This isn’t to say that Google Translate isn’t useful. In fact, it works really well with basic, straightforward speech. But for more complex applications, a human translator provides significant benefits and the value added from cultural relevancy is hard to beat!

Language is a funny thing—sometimes literally. The internet is filled with examples of how misplaced punctuation, incorrect spelling, or poor word choice can result in unintended (and sometimes inappropriate) statements. In a social scenario, these mistakes might be amusing. But in a business situation, they might be offensive. In a safety manual, they could be dangerous. By relying solely on Google Translate, you may succeed at delivering the words, but their intended message might be left behind. 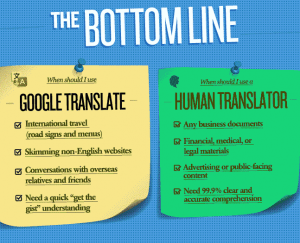 Now is the perfect time to make sure your most important information is translated clearly and effectively for Spanish-speaking audiences. English to Spanish Raleigh can help! Give us a call at 919-995-2986 or contact us online today.